Today, as every day, I give thanks for living in America – the country that President Trump last night called “The most magnificent country in the history of the world.”

When I was growing up here, the City always had fireworks on the 4th of July. I had a friend who lived on the hill above the river and we would sit on her front porch to watch the show. Then somewhere along the way they were forgotten. That bothered me.

We brought back the fireworks…

After I opened my own real estate agency, I joined the Chamber of Commerce and began pushing to bring the 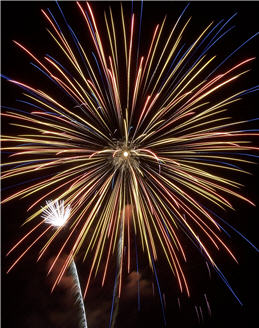 fireworks back. Finally they agreed – they gave me the go ahead to put on a show on the 4th of July.

It wasn’t easy, but thanks to a bit of luck and some young women who were good at talking people into donating to the cause, we did it. At the time I wondered why no other Chamber members pitched in to help. They told me later that it “wasn’t their project.”

That first year I was so worried. What if no one showed up?

Just as it was getting dark enough to start the show, I went out to the parking lot to get something from the car. On my way back the first shot burst into the air, and a little boy (about 7 or 8 years old) who was also walking back, stopped, threw his fist into the air and shouted: “Happy Birthday America!”

When I think of him and how he made me feel, I still get teary.

That little boy is grown now, perhaps with little boys of his own. I hope he and they are still shouting “Happy Birthday America!”

When the show was over and the lights came on, I was astounded to see the number of people in the park. I was even more astounded when I looked at the bridge, the big parking lot at the sawmill, and the road on the other side of the river. Car lights were coming on everywhere. In addition, there were boats on the river, starting up to head home.

They showed up, and they’re still showing up. While I only led the charge for 5 or 6 years, others have taken my place. I’m glad to say that Priest River will carry on with a fireworks display tonight. I think I’ll drive in to town to watch.

To those who hate our country and are rioting, destroying, and tearing down – I say: We’re not perfect, but we’re trying, and we’re still the best in the world. So please move. Go find a country you like.